Mountain View is an alternative Fairfax County public high school for students between the ages of 17 and 22. Many of the students there have struggled to graduate at 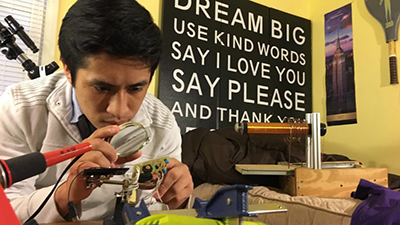 previous schools because of socioeconomic or academic challenges.

“It’s a last chance for them.” said Mountain View counselor Ellen Fay. She said Brito was struggling to stay in school, work and keep a roof over his head. “I was able to connect Brayan with our program for homeless students where they are able to pay the rent if a student is working.”

Homelessness was just one of the obstacles Brito faced when he arrived at the school four years ago, Fay recalled: “When Brayan entered our school, he did not speak any English.”

Four years later, Brito is about to graduate with top grades. He received a college scholarship given to just 11 seniors in Virginia on the basis of academics, leadership and public service. He has also earned the respect of the counselors and teachers at Mountain View for his determination and intellect.

The former NASA scientist said the young man would often approach him with inventions, “And I ask him, I said, ‘How do you know which way to put these things together?’ and he said, ‘Well, I just try different ways.’ And I’m thinking to myself, ‘This is a real scientist.’”

READ AND LISTEN TO THE ENTIRE INTERVIEW

Before Brayan went to accept his award, we sat down and talked with him about what motivates him to work so hard and what he thinks his future might hold. (If you ask us, whatever it is will be pretty awesome!)

Brayan Brito receives a scholarship from the General Assembly